Tina Chelidze grew up in graduate student housing at Penn State University. “I was lucky that that’s how I first saw America,” she says, “a green lawn filled with friends from every country, surrounded by smart, ambitious adults pursuing their dreams.” The American Dream – multiculturalism, meritocracy, opportunity for all – was a reality for her immigrant family and would serve as a guiding principle for her throughout her life.

Despite her parents’ embrace of the United States and their professional success, Chelidze grew up keenly aware of the importance of financial security and social capital in life. Originally born in the Republic of Georgia, Chelidze’s family moved to the United States after the collapse of the Soviet Union, when she was only three months old. Her parents made the decision to move abroad for a better academic and professional opportunity. Her mother and father pursued Ph.D. programs in chemistry and engineering, respectively.

“My grandparents were scientists and engineers, too,” Chelidze recalls. “I think it was really only in quantitative fields that someone could succeed on merit alone in Georgia.”

New York University (NYU) proved to be a great incubator for Tina’s growing interest in social sciences. She studied mathematics and economic theory, as well as minoring in creative writing. Her reflections on her parents’ experience in the United States turned her attention to issues of poverty and social policy.

“A lot of the research that I read in undergrad, I was never seeing the implementation of that research on the ground,” Chelidze says. “I would follow up on the things that inspired me and say, okay, what came of this? And frequently…not much.”

The research-practice gap frustrated Chelidze. She felt that the pursuit of knowledge should not stand alone without an effort toward implementation and social progress. “I read an interview with Toni Morrison that gave me some clarity,” says Chelidze. “She said she tells her students: When you get these jobs that you have been so brilliantly trained for, just remember that your real job is that if you are free, you need to free somebody else. If you have some power, then your job is to empower somebody else.” Tina resolved to help close the disconnect between research and practice. She decided to pursue a master’s in public affairs at Brown University.

At Brown, her core focus on economic policy and financial injustice brought her to discover Opportunity Insights. She liked that the organization was making an effort to define the American Dream.

“I think that phrase – ‘American Dream’ – has always been nebulous on purpose. It’s talked about in sweeping strokes, in naïve and innocent terms, despite a very difficult and complicated history,” she says. “Even so, I think the ideals it’s supposedly founded on are worth pursuing, no matter how idealistic they are.”

Chelidze joined Opportunity Insights on its policy team. She works on housing issues, specifically the Creating Moves to Opportunity (CMTO) project, an initiative to provide housing search assistance to new families with Housing Choice Vouchers. While her economics and public policy training prepared her for the type of analysis she does at Opportunity Insights, Chelidze gravitates toward first-person narratives to help inform her work. In preparation for her job, she read The Color of Law, Evicted, High-Risers, and other books on urban planning and the racist history of housing policy in the US. Understanding the effect of housing discrimination on families is key to her work with policymakers and practitioners turning research insights into evidence-based policies.

“When my parents first moved to the United States, we weren’t financially comfortable. They were on graduate students’ stipends. They had no financial backing, we had no family in the country, we had no social capital,” Chelidze recalls. “We came here alone. My parents barely knew the language. I felt that insecurity in my childhood. I think that’s not something you can ignore as a child. You realize your parents are smart, but are still worried all the time, and it affects your perception of the world.”

Now a seasoned member of the policy team, Tina Chelidze is excited to be leading the analysis for the What Works Cities initiative, which aims to utilize municipal data to solve city-wide issues for a cohort of municipalities across the country.

“I have always been motivated by injustice,” she says. “I knew that if I was going to work in this space, I wanted it to be for an institution that sees that poverty is a political choice, not a character flaw. I want this country to live up to how I first saw it. The American Dream should be possible for everyone, just as it was for my family.” 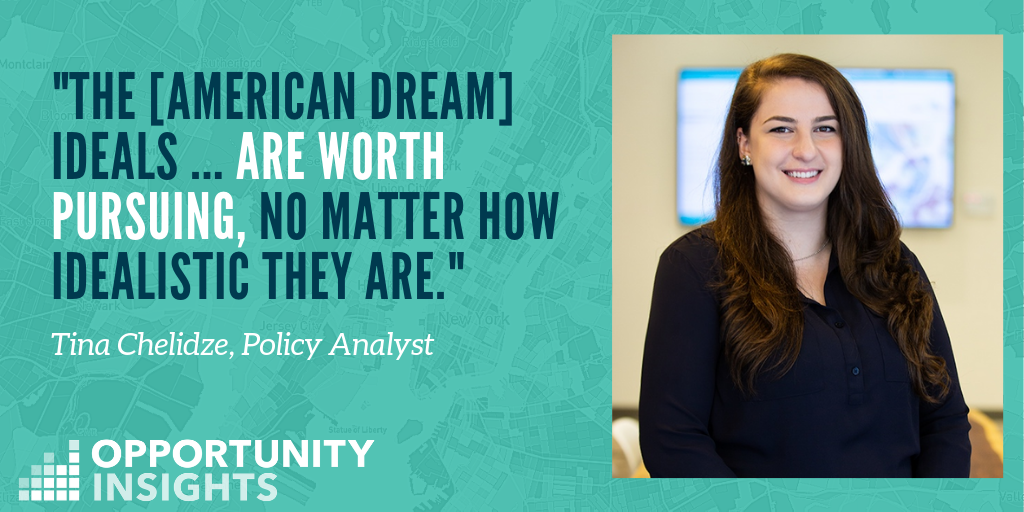