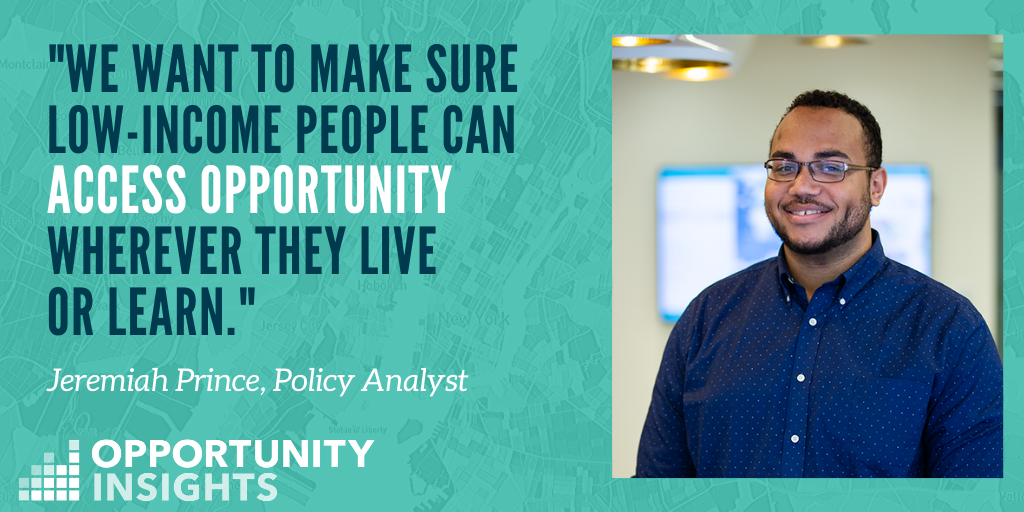 On a given day, you might find Jeremiah Prince navigating his way through a complex dataset. His love for data analysis makes him right at home among rows upon rows of numbers. To Jeremiah, though, this quantitative work is personal. “I’m from a low-income background,” Jeremiah says, “and all these data on low-income children made me even more aware of how rare my own situation was.”

Jeremiah partly attributes his own upward mobility to an extraordinary effort by his parents. As a young child in South Carolina, they made the difficult decision to homeschool he and his sister in hopes of giving them a better education than could be offered by the area’s underfunded elementary schools. It paid off: Jeremiah excelled upon transitioning to public school.

But Jeremiah emphasizes how extreme of a commitment it was to homeschool two children. “I don’t think a family should have to do something that drastic for their kids to get a decent education,” he says.  He mentions that without the massive disparities in public school funding and quality, his mother would not have had to postpone her career.

Jeremiah’s K-12 education culminated in acceptance to Brown University, a school where only around three percent of the student body is low-income.  He is quick to note that he initially gave little thought to his choice in colleges. As he recalls, he initially ruled out many top schools, assuming he’d have no way to pay without crippling debt. It was only when a college recruiter helped him navigate the various financial aid and funding available that Jeremiah was able to see access to education where before, he had seen only barriers.

Once at Brown, he found himself intrigued by the interdisciplinary nature of public policy and its potential to impact those with backgrounds like his own.

“[Policy] brings together all fields of social science,” he says, “you often have to consider aspects of economics, political science, sociology, and anthropology to address one issue.”

Now a Policy Analyst at Opportunity Insights, Jeremiah draws on his own childhood experience in South Carolina when working to translate economic research to policy change and the reduction of inequality.

Jeremiah sees his work as part of a central mission: to help bring about a world where low-income children don’t need superlative effort to lead dignified, stable adult lives. “I don’t think we should just accept that poorer kids go to worse schools or live in worse neighborhoods,” he says. “It’s why I’m happy that, at OI, we talk a lot about removing barriers and preserving access.”

But in his mind, expanding access to better schools and neighborhoods is only a step in the right direction. “Even the fact that second-class districts and neighborhoods exist is something policy can begin to fix,” he says. “We want to make sure low-income people can access opportunity wherever they live or learn.”